This project is one of the most difficult to implement. 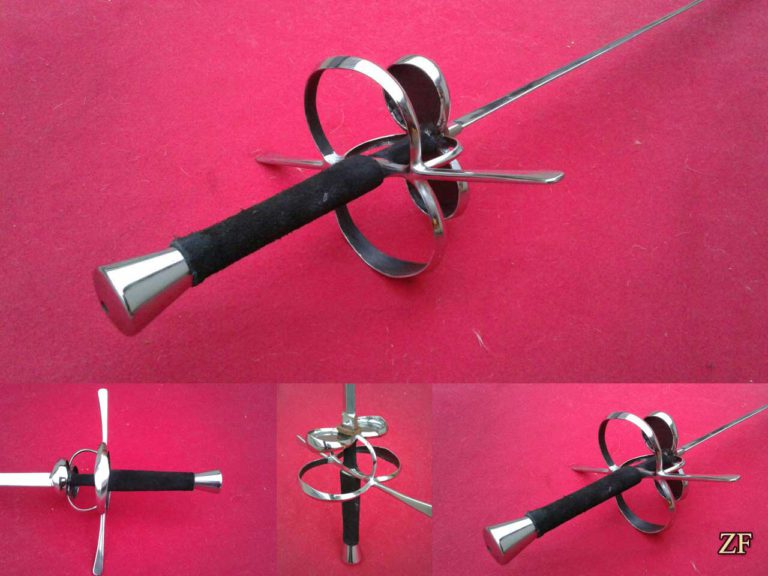 Historical sword
Фев 23, 2020 admin 0 Comment
The workshop “Zbroyev Falvarak” has been developing the idea of Japanese blade weapons for many years, the craftsmen of the workshop, many versions of katanas were made, with varying degrees of stylization.
To your attention, another version of the Japanese sword. I want to note that this work, like all the work on the site, is the result of our joint work with people who came and asked to create a similar sword. In other words. you can create with us any version of the Japanese blade.
The sword does not have sharpened edges, therefore, it is not a cold weapon. Keep in mind that sharpening such blades is not legal and contradicts the legislation of the Republic of Belarus.

Historical sword
Фев 23, 2020 admin 0 Comment
Two-handed buhurt falsion — the author’s version, a joint work of ZF and our partners.
This is the stylization of the Conyers falchion, greatly altered by the customer’s imagination. The weapon has a slot on the blade so that the blade butt can be used as a second handle. As far as we know, this weapon has no archaeological or pictorial sources. The blade is not polished.
Historical sword
Фев 23, 2020 admin 0 Comment
This project is one of the most difficult to implement. 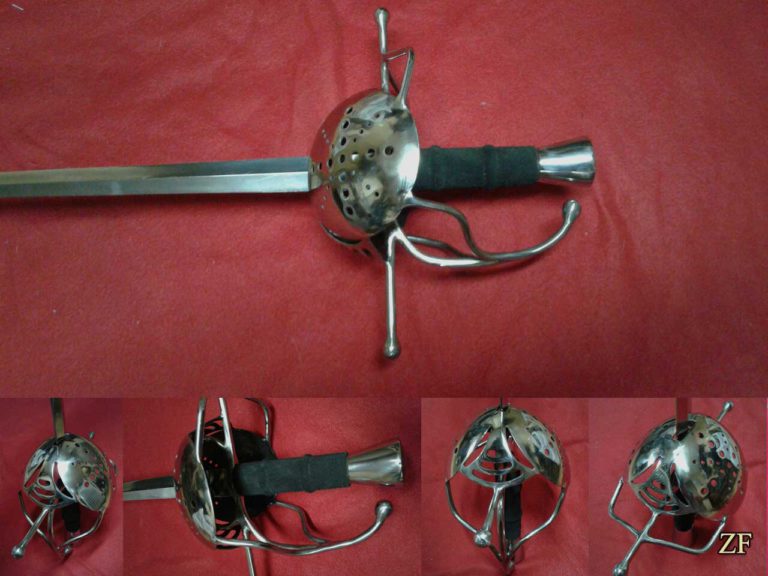 Historical sword
Фев 23, 2020 admin 0 Comment
Unicornius sword — one and a half-handed sword made to order. Latin inscriptions Fidelitas et honestas, Unicornius (unicorn).
A unicorn and a Yagelon cross are etched on top. Since 1386, the six-pointed cross has been used as the main element of the coat of arms of the Jagiellonians — the royal dynasty, the founder of which was the Grand Duke of Lithuania and the King of Poland Jagiello. In this capacity, the cross becomes part of the coat of arms of the Grand Duchy of Lithuania — “Chase”.

Xyphos (ancient Greek ξίφος English xiphos) is an ancient Greek straight double-edged sword. This sword was an additional weapon during the battle for the Greek armies after the spear (Dory) or throwing spear (Javelin). The classic blade had a usual length of about 50-60 cm, although there are references to the fact that the Spartans used swords with a blade of only 30 cm during the Greco-Persian wars. Xyphos was usually used only when there was no possibility of using a spear, in this case, a sword (xyphos) was used for close combat. To date, very few artifacts of their antiquity have survived. Peter Johnsson suggests that the xyphos sword translates as “penetrating light”. 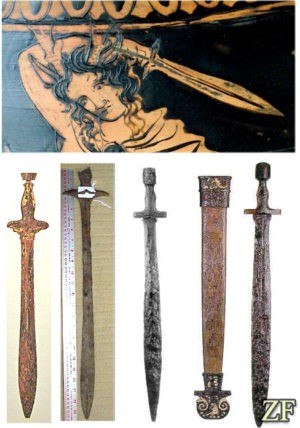 Xyphos has a leaf-shaped blade that allows you to apply powerful stabbing wounds. A similar form of sword has existed since the first swords appeared. The main material for such a sword was bronze. Bronze swords were made by casting methods; for litas, the shape of the sheet is more convenient for casting. In a later period, swords began to be made of iron.
Xyphos

Leaf-shaped short swords were not limited to the territory of Greece, a similar form of swords can be found throughout Europe in the late Bronze Age under different names. For example, iron swords of the Celts of the La Ten period (stylization for a similar sword, we did about 5 years ago).

We tried to reconstruct as close as possible to archaeological finds, but we used modern high-quality steels. Oak wood linings.

In the middle of the II century, another sword, spatha, gradually replaced the gladius. A little heavier (2 kg), longer and narrower (from 75-100 cm long and 5-6 cm wide) in dense Roman formation, it was inferior to the gladius in compactness. It is believed that the Romans wore a spate on their right side, and not on their left: it was more convenient to get a sword from its scabbard without risking the life of a nearby warrior.
II century AD e.
Initially, it was an exclusively chopping weapon, which the Romans borrowed from the Gauls, who began to form the basis of the Roman cavalry. Subsequently, the Roman version of the spatha was transformed, it received a pointed, like a gladius, end, which allowed both chopping and pricking at the same time. The Roman version of the sword was later borrowed by the Germans, and even the famous Viking swords, as it is believed, originate precisely from the Roman spat.
The surviving specimens of spats of German origin had blades with a length of 71 to 81 cm, a width of 45-60 mm and a mass of 1.7 to 2.4 kg.

Our version turned out to be heavier than the originals due to the steel set on the handle. If steel is replaced with wood, then the weight will correspond to archaeological finds.

Sword type XVa — this type of sword is characterized by high strength of the blade, the sword was created directly in connection with the emergence of new forms of armor. The shape of the blade and the cross make this sword more convenient for stabbing, but at the same time, the opportunity for strong chopping strikes will remain. 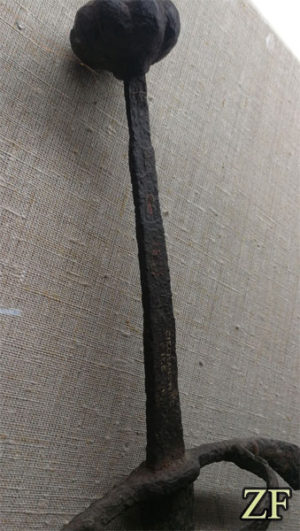 «Sword under the KP-8929 number, which dates from 1490-1550 years., Was found in Tsehanavtsy early 1920s. and sent to the Grodno Museum H.Tsyatserskim «. Safety: black coated layer hardened oxides and rust bayonet blade broken off.
Sharing a flat handle, gradually tapering to navershsha. Navershsha in the form of a flattened sphere, vertically divided into nine slices (like orange). Cross-flat, curved blade in the direction of the expanded ends, where you can see the remains of geometric ornament. On the outer side of the ball to the cross welded protective shackle a semicircle about 77 mm in diameter. Blade evenly tapering towards the tip. diamond-shaped in cross section. Dimensions: overall length sword — 950 mm, -215 mm arm length, the width of the stem at nasadtsy — 18 mm navershsha — 33 × 43 mm, the blade length — 735 mm, the blade width at nasadtsy — 31 mm.
By classifying Ovkeshota-Gloska blade of the type «HVa» navershsha most appropriate for the type «R», cross-type «6». Judging by the presence of the brackets on the crosspiece and form navershsha it can be argued that the sword corresponds to the level of development of production of cold steel in the Renaissance, so it nalezhsh date no earlier than the late 15th century, and most likely -. The beginning of the 16th century. The presence of the ball lands on the ON confirming the inclusion of the common European gerytory historical process and reflects the change of the medieval period and the Renaissance. »
Ladies and gentlemen — those swords our ancestors fought for the Grand Duchy of Lithuania «.

We pamenshylі pamera ball is laid out on 10 adsotkaў, more sword didn’t climb near the stove. For the getag, the 0.5 kg wagon decreased.
Bokhan adnosіts uvshshcha yes typu T5, ale to us padaetsstsa, that geta pamyna varyyant memory і typamі T1 і T5. Najal, we don’t make the ball reveals. If in May we’d be a good Varyant, then we would be great for helping.

Katzbalger, literally — «catcoder» comes from the German. the words «balgen» is a quarrel, and means intense close combat, reminiscent of a fight between wild cats.

Katzbalger was often used by pickers, archers, and crossbowmen as a “weapon of last resort” if the enemy came too close and bows and peaks became ineffective.